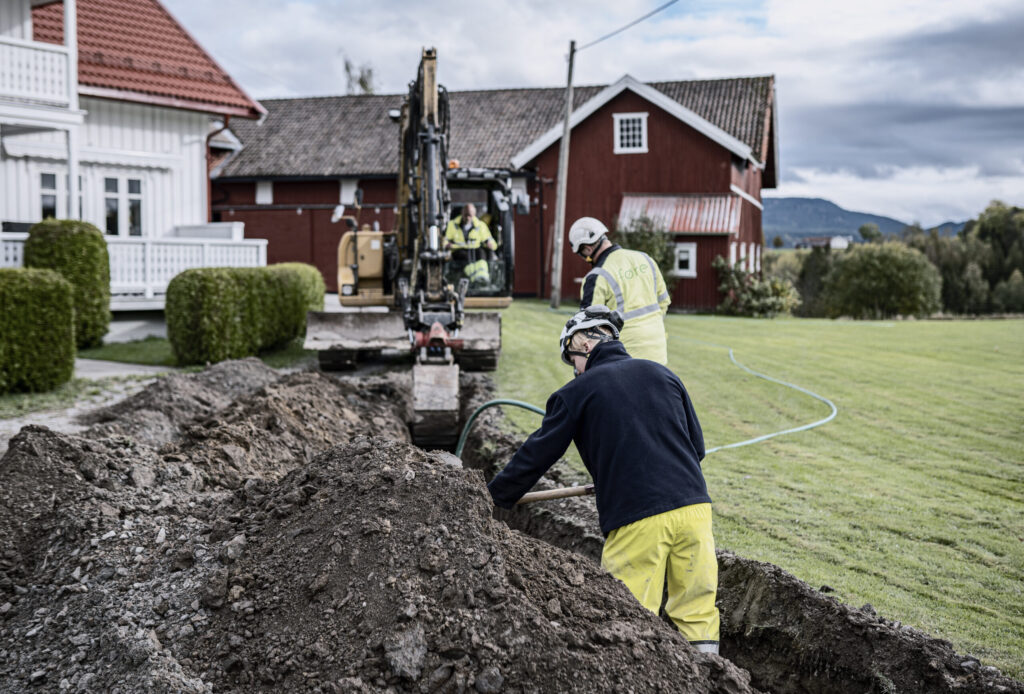 Føre introduces new grid rent. Capacity stages and energy stages will be introduced in accordance with requirements and regulations.

The purpose is to even out electricity consumption throughout the day, so that consumption peaks are lower, and we get better utilization of the electricity grid. Then we save money and the environment, and keep the grid rent as low as possible for you as a consumer. We should therefore avoid washing clothes, making dinner and charging an electric car at the same time.

How does the new pricing model for grid rent work?

Previously, only the number of kilowatt hours affected your grid rent. Now you have a greater opportunity to influence the bill. From 2022, the grid rent for household customers will consist of two parts:

The capacity link is determined by your 3 highest daily maximums * within a calendar month. If you even out the electricity consumption throughout the day, you get a lower capacity link than if you use a lot of electricity at once. For example, it will pay not to wash clothes, make dinner and charge an electric car at the same time. You can advantageously charge the electric car with a home charger at night.

The energy level is determined by how much electricity you use in total (number of kilowatt hours) and when you use the electricity. You pay less per kilowatt hour at night than during the day. Some companies will also have lower energy levels on weekends and during the summer, when the power grid is less congested.

Who will get higher, unchanged and lower grid rent than today?

The power grid is a large splice layer that is paid for in its entirety by the users through the grid rent. In general, those with small homes and low simultaneous consumption will pay a smaller share than today, while those with larger homes and one or more electric cars will pay a larger share. These still have good opportunities to adapt their consumption and thus reduce the grid rent - if they make a small effort.

Will my grid rent decrease from 2022?

It is the authorities who determine the income for the individual network company. In some regions, the grid rent will increase in 2022, regardless of the new pricing model. This is due to increased costs for operations and investments in the network. But everyone gets a greater opportunity to influence their grid rent. The network companies will inform their customers about how the new pricing model will work for them.

What does the new pricing model mean for different customer groups?

Apartments: Most people will get approximately unchanged grid rent, because the power consumption is basically relatively even and low. The customers here will normally end up in the most reasonable capacity step.

Detached houses: Will be divided into several capacity steps and the costs can go both up and down compared to today. They can affect the grid rent by evening out consumption so that they end up at a low level. Those who have an electric car can save money on charging with an approved home charger at night. Then both the electricity price and the grid rent will normally be cheaper. With large simultaneous consumption, it will be more expensive than today.

Homes with solar cells: The use of self-produced electricity will provide slightly less savings because the energy link in the grid rent is reduced, but there will still be a lot to save on electricity prices and taxes. It is also important for these to even out consumption, especially during the hours when they do not have their own electricity production.

Re-insulation, heat pump etc .: Energy efficiency measures will provide slightly less savings, because the energy link in the grid rent is reduced. But there will still be a lot to save on electricity prices and taxes.

Cabin owners: For owners of average cabins, the calculation is about the same as for owners of detached houses. Here, too, the advice to even out electricity consumption throughout the day applies. If you bring an electric car to a cold cabin, you may want to wait to charge the electric car until the cabin is heated.

Companies with annual consumption below 100,000 kWh: No significant change for these, but customers with high electricity consumption in individual hours should consider adjustments.

How much will it be possible to save on using electricity smarter?

The price of the various capacity steps will vary between the grid companies, but several suggest that it will be around NOK 1,500 to save annually on adapting consumption to a lower capacity step. Many also add up to half the price of the energy link per kilowatt hour at night, compared to daytime. If you move the charging of an electric car to night with a safe home charger, it will be money to save.

What proportion gets a real opportunity to influence their grid rent?

Those who use the most electricity will be able to influence their grid rent the most - not least everyone who has an electric car and their own home charger. It should not be expensive and difficult to use electricity smarter. There are already simple solutions for automatic charging of electric cars when prices are most favorable. The same goes for heating.

How can we be sure that the new grid rent will føre for smoother power consumption?

Several network companies have carried out pilot projects and surveys. Three out of four in the largest pilot experience that they have the opportunity to adapt their power consumption. Push warning about periods with higher prices resulted in up to 7.5 per cent decrease in electricity consumption, which is a good effect. Experience so far shows that customers want tips and notification on how they can use electricity smarter.

How can I keep track of how much power I use at one time?

By logging in to “ My page ”At the network company, you can see how much electricity you have used per hour backwards in time. If you want to follow in real time, you can with simple equipment connect to the HAN port on your electricity meter. At the same time, you must ask the network company to give you access to data from the meter. The meter can communicate with automatic control systems for energy use in the home.

Why do you choose to introduce this at a time of very high electricity prices?

The introduction of a new grid lease has been discussed and planned for several years, where various proposals from the authorities have been through two rounds of consultation. The Ministry of Petroleum and Energy made the final decision to introduce the scheme, with support from the grid industry. We see that there can be a lot to deal with for customers now - the positive thing is that they get a greater opportunity to influence the grid rent.

How large network investments is it realistic to save on smarter power use?

By making better use of the existing power grid before we build new power lines, the grid companies can save large costs and thus keep the grid rent as low as possible for you as a consumer. Only by moving the charging of electric cars to the night, we can save NOK 11 billion in grid investments, according to calculations from the Norwegian Water Resources and Energy Directorate (NVE).

What about the danger of fire if people start washing clothes at night?

Moving consumption should not affect comfort or safety in the home. For example, we do not recommend anyone to use a washer, dryer or dishwasher when sleeping. There is also not much to save on this. On the other hand, you can safely charge an electric car at night, if you have installed your own home charger.

What does the new model mean for the network companies' revenues?

The grid companies' total revenues are determined by the authorities through annual revenue limits, and will not be affected by a new pricing model. Operation, maintenance and development of the power grid in Norway costs around NOK 27 billion annually. This bill is covered in full by the users of the network. By utilizing the capacity of the grid smarter, we can keep the grid rent as low as possible for electricity customers over time.

You can find out more about which cookies we use or turn them off in Settings .

A strictly necessary cookie should be activated at all times so that we can save your cookie settings.

If you disable this cookie, we will not be able to save your settings. This means that each time you visit this website, you must enable or disable cookies again.

We use Google Analytics to collect anonymous information such as the number of visitors to the site and the most popular pages.
Having this cookie helps us improve our website.

Please enable strictly necessary cookies first so that we can save your settings!